On July 7, an article entitled "Spreading JICA Project: Safe and Delicious Sake for Farmers and Universities, Hands-on, Steady Steps" was published in "Cambodia News No. 20" published by the JICA Cambodia Office. 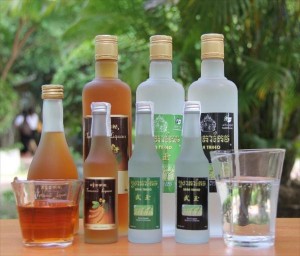 Do you know the sake named "Suraso"?It is a sake that has been made by Cambodian farmers for a long time.Actually, this suraso was not easily accepted by people, and the brewers have been feeling harsh for many years.

In rural areas, it is famous as an indispensable liquor for ceremonial occasions, but negative opinions such as not delicious, not profitable, and unsanitary were widespread.As a result, the income of sake brewers was declining, but Nagoya University started to support them.
Nagoya University, together with the Royal Agricultural University of Cambodia, has focused on research and development of improved technology for making safe and high-quality sake.Then, in order to have them acquire the technology, the "Agricultural Product Processing Technology Promotion Project by Reconstruction of Traditional Industries" by both universities was carried out in Takeo Province for three years from 2010.

In this project, basic training on hygiene and quality control was conducted for 104 farmers, and advanced training was also conducted for farmers aiming to manufacture and sell higher quality products.After that, the farmer's raw sake that cleared the strict examination was purchased, stored and bottling at the Royal Agricultural University, and the result was "Suratakeo (Taketama)".
By participating in the project, the selling price of sake has increased more than 2.5 times, and many farmers now use sake brewing as their main source of income.Furthermore, with the cooperation of Nagoya University, Royal Agricultural University has set up a sales company for Slatakeo called CJHAP within the university, and now it ships 500 to 600 bottles a month, mainly at restaurants and souvenir shops in Phnom Penh. ..

The implementation of this project has had a positive impact on Cambodia as a model case for universities and communities to work together.

Nagoya University is a comprehensive university with 9 faculties, 13 graduate schools, 3 affiliated research institutes, nationwide joint usage, and 5 joint research centers.Through creative research activities, he explores the truth and produces some of the best intellectual achievements in the world.Foster courageous intellectuals with abundant logical thinking and imagination through educational practices that emphasize spontaneity […]