A research group led by Professor Hirofumi Tanaka of Kyushu Institute of Technology discovered that by adsorbing organic nanoparticles on graphene nanoparticles, the area around the adsorption site becomes a semiconductor.It may be a material for next-generation semiconductor components that will replace silicon. 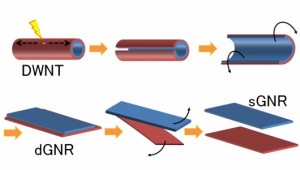 In semiconductor components, which are the cornerstone of the computer industry, miniaturization, which has been the driving force for improving performance, has reached its limit.This is because the wiring part that constitutes the circuit and the device part that consists of semiconductors cannot function due to the increase in electrical resistance if they are further miniaturized.Graphene does not cause a significant increase in electrical resistance even when forming fine circuits.It is expected that this property will lead to further improvement in the performance of semiconductor components.However, graphene is not a semiconductor, so there was a problem that it could only be used for wiring.

Although the performance of the central processing unit (CPU) of computers is steadily improving even now, it cannot be denied that it has slowed down considerably compared to around 2000.The day may come when research from the material level will make dramatic progress again.

Kyushu Institute of Technology with a history of 113 years.Based on the educational philosophy of "cultivating human resources with dignity and creativity," we provide high-quality education to train engineers and intellectual creators who have aspirations and passion and open up industries.Providing a variety of learning programs and improving the learning environment, as an ability necessary for a global society […]

→ Details of Kyushu Institute of Technology