Teikyo University has introduced 143 display terminals using Sony's digital paper into the new school building on the Hachioji Campus for the "digital signage system (electronic signage)" that informs of class closures and timetables, and has been in operation since September 2015. I decided to do it.

Traditionally, at universities, we have created paper bulletins for class changes, class cancellations, and conference event information, and have replaced them each time.However, due to the increase in the number of classrooms, there is a need to perform this work with as little effort as possible, which has led to the introduction of display terminals that utilize digital paper. 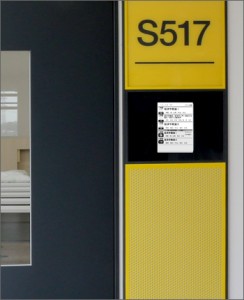 The introduction of this display terminal is handled by Sony Business Solutions Corporation, which develops businesses from broadcasting stations to government offices, universities, and companies.The reason why Sony's display terminal was selected this time is that Sony's digital paper is A4 size, which occupies most of the documents in the world, and because it uses reflected light for display, it has a wide viewing angle like paper. It can be provided, and it has high contrast and excellent visibility.In addition, it was also evaluated for its low power consumption, which uses power only when the display is changed, and for continuous display during a power outage, without using a backlight.

* Sony's digital paper is A4 size and is thin and lightweight, weighing approximately 358g.You can also write smoothly like paper with the attached pen.In addition to being able to transfer teaching materials, dissertations, materials, etc. that were previously printed out on paper to digital paper as they are, the Wi-Fi function allows you to share files over the network.

A comprehensive university with a wide range of fields, including 5 faculties, 10 departments in liberal arts, science and engineering, and medical science, on 32 campuses (Itabashi, Hachioji, Utsunomiya, Fukuoka, Kasumigaseki).At Teikyo University, there is an environment where each student's talents can be blossomed and the future of "my own style" can be found.Acquire logical thinking through practice "Practical science [...]