MOOC is an open lecture that anyone can take for free on the Internet.There are multiple platforms, mainly in the United States, and a certificate of completion will be issued if the conditions are met.Kyoto University announced on the 8th that it will start distributing lectures by President Juichi Yamagiwa on the platform "edX" in which the world's top universities such as Harvard University and Massachusetts Institute of Technology participate.This is the first attempt in the world for MOOC, which is taught by the active president and president of the Graduate University for Advanced Studies, to be officially distributed through the university. 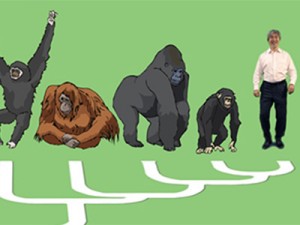 In May 2013, the university participated in the edX consortium for the first time as a Japanese university, and has already delivered lectures by Professor Shinari Uesugi and others.The MOOC "Evolution of the Human Sociality" ("Human Evolution Theory") by President Yamagiwa, which will start in October this year, covers the historical history of primate research that began at Kyoto University and the gorillas that President Yamagiwa has done so far. Through fieldwork research on the African continent, the content will be closer to the origin of humanity's sociality, and registration of students has already begun on the edX site.

Currently, more than 1,500 MOOCs are distributed on major global MOOC platforms such as edX and Coursera.Free full-scale university lectures, including world-class instructors, have the potential to revolutionize higher education and are rapidly expanding around the world.

Foster a free academic style based on the spirit of "self-respect for self-weight" and open up a world of creative learning.

With the motto of self-study, we will continue to maintain a free academic style that is not bound by common sense, and develop human resources who have both creativity and practical ability.We provide an inclusive learning space that allows for diverse and hierarchical choices so that students themselves can choose a solid future through valuable trial and error. […]