Professor Nobuto Saeki of the Department of Mechanical Engineering, Faculty of Engineering, Shibaura Institute of Technology has developed a new food sorting device in collaboration with Echo Co., Ltd., a food manufacturing machine manufacturer.It is a device that static electricity removes foreign substances mixed in dried vegetables used for cup noodle ingredients.This device can reliably remove foreign matter that could not be removed before. 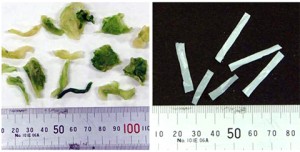 In the foreign matter removal equipment that has been introduced in the past, it was common to detect foreign matter from the image of vegetables passing through the production line and blow it off by air injection.However, this method has the problem that it cannot be completely removed if foreign matter adheres to the vegetables or if it gets into a position where the air does not reach, so it was essential to check with the human eye at the end.

In the new device, vegetables are first charged by a method called corona charging, and then they pass through a rotating cylinder.Vegetables and foreign substances that stick to the inside of the cylinder due to static electricity are carried to the top as they rotate.Vegetables fall on the way due to their weight, but foreign substances are carried to the top of the cylinder and removed.With this method, all sides of the vegetable touch the inside of the rotating cylinder, so it is possible to remove foreign matter adhering anywhere.In the experiment, the food purity was 100%, and the rate of accidentally removing vegetables was suppressed to 1%.

→ Details of Shibaura Institute of Technology