Ina Research and the research team of Dr. Yuji Shiba of Shinshu University will start a trial of transplantation of iPS cells into the heart using cynomolgus monkeys.Even if myocardial infarction survives from the acute phase immediately after the onset, part of the myocardium is necrotic, so it is not uncommon for heart failure to occur at a later date, leading to death.From this result, it may be possible to recover the function of the necrotic heart and prevent heart failure. 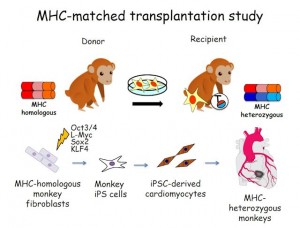 Lecturer Shiba has been involved in the research and clinical practice of heart and vascular diseases using stem cells such as ES cells and iPS cells, which have the ability to differentiate into various cells in the body.Previous studies have conducted tests in which cardiomyocytes made from human ES cells are transplanted into guinea pigs with myocardial infarction, and have succeeded in improving cardiac function and suppressing arrhythmias that can lead to death.

In this research, cardiomyocytes were transplanted in cynomolgus monkeys in collaboration with Ina Research (Ina City, Nagano Prefecture), which is engaged in drug safety performance tests.Aiming for practical use in humans, it will be an experiment with cynomolgus monkeys that are closer to humans.As a result, it was confirmed that the transplanted cardiomyocytes were engrafted for 12 weeks or more, and it was found that the cardiac function was improved by examination using CT and the like.Lecturer Shiba and Ina Research will continue joint research and aim to establish it as a technology that can be used for humans in the medical field.

It has been 2006 years since Professor Shinya Yamanaka of Kyoto University discovered iPS cells in 10, and industry and academia have come together to produce many research results.Although iPS cells are attracting attention as a trump card for regenerative medicine, they will save many lives if the tissues lost in various organs can be regenerated.

Shinshu University is a wide-area campus-type general university with five campuses in Nagano Prefecture.It consists of eight faculties: humanities, pedagogy, economics, science, medicine, engineering, agriculture, and textiles, and conducts education and research to acquire a wide range of education and basic abilities.Utilizing common education across faculties and the regional characteristics of Shinshu, which is rich in nature […]