Unraveling the mystery of the F ring of Kobe University Saturn

Professor Tatsuki Hyodo (graduate student) and Professor Keishi Otsuki of Kobe University have revealed that Saturn's F ring and its shepherd satellite are formed as natural by-products during the process of Saturn's moon formation.Saturn is known for having multiple rings and satellites.Twelve rings have been observed, and the main ones are named D ring, C ring, B ring, and A ring from the inside. The F ring is located outside the A ring, and has strange points such as its narrow width, its characteristics changing every few hours, and the two shepherd satellites Prometheus and Pandora inside and outside the ring. ..The shepherd satellite was predicted to be involved in the formation of the F ring, but the details were not well understood. 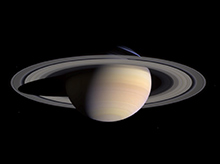 The latest theory of satellite formation is that several small satellites with dense nuclei are formed near the outer edge of the main ring at the final stage of the Saturn satellite formation process.Mr. Hyodo and Professor Otsuki investigated the process of collision between these small satellites by computer simulation.As a result, it was found that the two satellites that survived the collision became the current shepherd satellites, and that the fragments scattered in the area sandwiched between their orbits became the F ring.Furthermore, these processes are not the result of accidental occurrence on Saturn, but can occur naturally under similar conditions.For example, the ε (epsilon) ring of Uranus is thought to have occurred in the same process.It is also believed that the moon was formed from the ring as the most promising origin of the moon, which may lead to the elucidation of the formation process of these satellites.

Saturn's ring is known to have been first observed by Galileo Galilei in 1610 with his own telescope, but the quest continues for more than 400 years. There are many things that we have learned for the first time thanks to the ability to fly the spacecraft closer since the 1970s, but technological advances will continue to reveal many mysteries.

Kobe University, which is located in a port city open to the world, has 4 faculties and 10 faculties under the 15 university arts series of "humanities / human sciences", "social sciences", "natural sciences", and "life / medical sciences". It is a comprehensive university with a graduate school, one research institute and many centers. Based on the philosophy of "harmony between science and reality," we have strengths in both the humanities and science fields […]