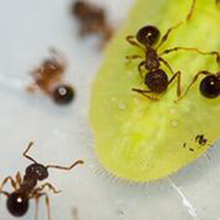 Pristomyrmex vulgaris gathering on larvae of Arhopala japonica (from source)

The symbiotic relationship between the lycaenid butterfly and the ants trades for nectar and defense from natural enemies, but while ants can search for other food without receiving nectar, the lycaenid butterfly is preyed on by natural enemies without the ants. Therefore, it cannot be said that the mutual interests are balanced.Therefore, a joint research group of Assistant Professor Ken Hojo of the Graduate School of Science, Kobe University, Ryukyu University, and Harvard University speculated that the larvae had some mechanism for retaining ants.As a result of experiments using Arhopala japonica and Pristomyrmex vulgaris, we found that ants that ingested honey had reduced walking activity, stayed with Arhopala japonica for a long time, and became more aggressive.Further measurements of ants' brain substances revealed that ants that ingested nectar had reduced dopamine.In humans, too much dopamine can lead to schizophrenia, and drugs that suppress dopamine may be used for treatment, but the nectar of the larvae of the lycaenid butterfly has the same effect as the drug for schizophrenia.

According to this study, the relationship between larvae and ants of Lycaenidae, which has been considered to be "mutualistic", is maintained by manipulating ants by selfish behavioral manipulation on the side of the nourishing larvae. It became clear.Assistant Professor Ken Hojo says, "I would like to further study how beneficial it is for ants to ingest larval nectar."

The results of this research were published in "Current Biology" on July 7st.

Source:[Kobe University] There is a trap in a good story-I discovered that a larva of a lycaenid butterfly is manipulating ants-

Kobe University, which is located in a port city open to the world, has 4 faculties and 10 faculties under the 15 university arts series of "humanities / human sciences", "social sciences", "natural sciences", and "life / medical sciences". It is a comprehensive university with a graduate school, one research institute and many centers. Based on the philosophy of "harmony between science and reality," we have strengths in both the humanities and science fields […]