University of TsukubaKyushu Institute of Technology 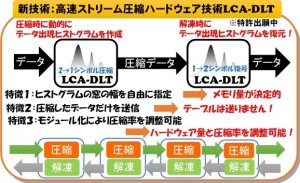 The newly developed compression technology "LCA-DLT" is a high-speed data compression technology that enables continuous compression and decryption without temporarily accumulating data transfers.In real time, data can be reduced to 1/10 the size, and communication speeds such as networks can be increased up to 10 times without changing transmission media such as copper wires and optical cables.With this technology, the communication performance and data storage capacity of devices that handle big data can be dramatically improved, and next-generation applications such as lifelogs *, which currently have the problem of handling huge amounts of data, can be compacted. Will be able to be implemented in.

With this LCA-DLT technology, it is possible to significantly improve the amount of data transmission and transmission speed even with existing infrastructure, which can lead to cost reduction.In the future, it is expected to be applied to storage servers for "data centers" that store large amounts of data and wireless transmission of ultra-high-quality sound sources.

* Lossless data compression is a compression method in which compressed data is restored by decryption, and is also called lossless compression.On the other hand, image compression such as JPEG is called lossy compression and cannot be restored to the data before compression.
* Lifelog is a next-generation application that uses a wearable device to store information such as daily physical activities and behaviors, heartbeats and pulses as big data, and provides health management and lifestyle advice.

Kyushu Institute of Technology with a history of 113 years.Based on the educational philosophy of "cultivating human resources with dignity and creativity," we provide high-quality education to train engineers and intellectual creators who have aspirations and passion and open up industries.Providing a variety of learning programs and improving the learning environment, as an ability necessary for a global society […]

→ Details of Kyushu Institute of Technology

Continue to challenge interdisciplinary fusion and internationalization, and develop human resources with intelligence and humanity

University of Tsukuba is the core of Tsukuba Science City, an international city with a high academic and cultural scent.The current education system is 9 groups, 23 classes, and it is possible to take specialized introductory courses from all fields, aiming to have creative intelligence and rich humanity.Solving global issues with soul genius […]