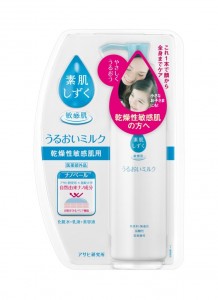 Associate Professor Shinsuke Ifuku of Tottori University has succeeded in extracting chitin, which is a component of crab shells, as fiber.We have been conducting joint research with Asahi Food & Healthcare Co., Ltd. to commercialize this under the name of "Marine Nanofiber", and as the first step, the multifunctional all-in-one milk "bare skin drop moisturizing milk" was released on September 2015, 9. It will be released from the day.

The fact that Associate Professor Ifuku, who was originally researching the extraction of fibers from trees, came to Tottori was the catalyst for research on the effective use of crab shells.Tottori has the best crab landing port in Japan, and the current situation is that a large amount of shells are discarded.We started research on extracting fibers by having the shells provided by inns, etc., and succeeded in extracting the fibers in about a month.Until now, chitin was generally powder, but it was not very compatible with water and was difficult to use.On the other hand, fibrous chitin blends well with water to form a jelly, so it can be used in various ways such as adding to cosmetics and foods.Subsequent studies have shown that it has excellent moisturizing, anti-obesity, and intestinal regulating effects.Furthermore, by mixing it with plastic, it is possible to increase the strength while maintaining transparency, and it can be used for digital terminals such as smartphones and industrial products such as films.

The effective use of crab shells that have been thrown away will continue to lead to the creation of new industries.Its versatility, which can be used not only for cosmetics and foods but also for plastics, is expected to expand its applications in the future.

Fusion of knowledge and practice.Developing education based on modern culture and human power

Based on the basic philosophy of "Fusion of knowledge and practice," Tottori University aims to solve problems in local communities and understand the international community through education based on the modern culture and human power necessary for that era. We are working to develop well-educated human resources who can be the core.With 4 general universities of regional faculties, medical faculties, engineering faculties, and agriculture faculties […]