Professor Minoru Asada of Osaka University made Leonardo da Vinci by making full use of android development technology.It will be exhibited at the Da Vinci Museum in Milan, Italy, where the Expo is being held, and then in Osaka. 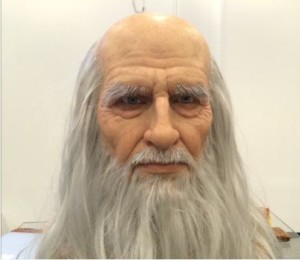 Leonardo da Vinci (1452-1519), the author of The Last Supper and the Mona Lisa, is known as a versatile man who has mastered various fields including science and art and achieved a fusion of them.In today's world, where research fields are subdivided and people tend to lose their perspective, there is a need to integrate the fields that Da Vinci has done.By reproducing this great man with Japan's proud android technology and showing it to children around the world, we will be interested in a wide range of fields of science, technology and art, and contribute to the development of human resources who will lead the next generation.

Da Vinci android can move by external operation like the conventional android, and can express various facial expressions.On the other hand, most androids so far have a model person, but this attempt is different in that it reproduces a historical person.Since there are various theories about the characteristics of the body, it was very difficult to determine the appearance.By creating 3D data with a computer based on self-portraits and literature and exchanging opinions with the Da Vinci Museum, we decided on body characteristics such as facial expressions and beards.

The Da Vinci android created in this way will be exhibited as a living teaching material that conveys the science and technology of robots to children. It will appear in Milan from September 2015th to 9th, 4, and at Grand Front Osaka in Osaka City from December 9rd to February 27th, 12.In addition to Da Vinci android, the establishment of android technology and the exhibition of Da Vinci's achievements will be held.Professor Asada and his colleagues want to lead the education and enlightenment of science and technology using Da Vinci android.Even after finishing the exhibitions in Italy and Japan, it seems that they will actively participate in events and exhibitions all over the world.