Supervised by Professor Setsuko Kuwahara of the Faculty of Nursing and Nutrition, Shukutoku University, the "Reduced Salt Support Lunch Box" developed in collaboration with FamilyMart Co., Ltd. will be on sale from June 2015, 6 at approximately 30 FamilyMart stores, mainly in the Kanto region. 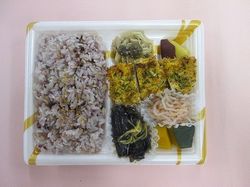 Professor Kuwahara of the same university is a professional in clinical nutrition with many years of experience in nutrition management as a registered dietitian at the National Cancer Center Hospital.Utilizing the experience and knowledge of Professor Kuwahara, there are two types of bento that I supervised this time: "Nikujaga bento (curry flavor) / 498 yen including tax" and "Salmon fried bento / 598 yen including tax" that take salt and nutritional balance into consideration.Both bento boxes have been devised to reduce salt and calories while giving a sense of volume.

Nikujaga bento (curry flavor) is devised to reduce salt content by adding curry flavor to the main meat potato, and fried eggplant, stir-fried spinach, and sweet and sour sauce of cauliflower are served.The rice contains 20% brown rice, the equivalent amount of salt is 2.0g or less, and the standard calorie is 445Kcal.

The salmon fried lunch box was made by frying unsalted salmon trout to reduce salt content, and served with tartar sauce and lemon juice.The side menu is made with lotus root and konnyaku kinpira, Chinese cabbage and shimeji soup stock, and is colorfully finished with peppers and paprika.The rice used is barley rice with black rice, the equivalent amount of salt is 2.0g or less, and the standard calorie is 569Kcal.

FamilyMart is developing health-conscious products, and so far, in the Kansai region, we have released bento boxes developed under the supervision of a registered dietitian at Kobe City Medical Center General Hospital since January 2015. ..

Source:[Shukutoku University] "The" Suitable Salt Support Lunch Box "supervised by Professor Kuwahara of the Faculty of Nursing and Nutrition will be on sale at FamilyMart from June 6th.

To be "I want to be".Here is the learning that is suitable for the future "I"

Shukutoku University is a comprehensive university consisting of 7 faculties and 13 departments of comprehensive welfare, community policy, nursing nutrition, management, education, and humanities.Based on the founding spirit of "altruistic symbiosis," we develop human resources who have basic abilities as a bachelor and are active in various fields.Practical learning that will help you to play an active role in society, each student […]