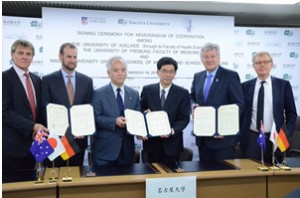 Under the previous system, in order to obtain a bachelor's degree from two universities, domestic and overseas, it was necessary to obtain the required credits for each.However, under this new system, Joint Degree, in addition to study abroad destinations, classes taken in Japan are also recognized as credits at affiliated schools, and it is now possible to obtain a joint degree from both universities while attending one university. ..
Under this new system, the Graduate School of Medicine, Nagoya University will open a four-year doctoral program, "International Collaborative Medicine," in October 2015 in collaboration with the University of Adelaide School of Health Sciences.Students will study abroad at the University of Adelaide for at least one year from the second year to the first half of the fourth year.Upon completion, you will receive a PhD degree in medicine from Nagoya University and Dalian, Adelaide.

Nagoya University, which aims to be ranked high in the TOP 100 in all world university rankings such as "QS" and "THE", has partnered with world-class universities through a joint degree to deepen exchanges between universities and internationally. It is also expected that raising the name recognition will lead to an increase in international co-authored papers, which is an important index in the world rankings, and to the acquisition of excellent overseas human resources.

* University of Adelaide = A public university in South Australia founded in 1874.It is the third oldest in Australia and has produced five Nobel laureates so far, focusing on cancer research in the medical field.

Nagoya University is a comprehensive university with 9 faculties, 13 graduate schools, 3 affiliated research institutes, nationwide joint usage, and 5 joint research centers.Through creative research activities, he explores the truth and produces some of the best intellectual achievements in the world.Foster courageous intellectuals with abundant logical thinking and imagination through educational practices that emphasize spontaneity […]