The Ministry of Education, Culture, Sports, Science and Technology (MEXT) is considering enhancing descriptive questions and using computers in the "University Admissions Achievement Evaluation Test" (tentative name), which will start in 2020 instead of the National Center Test for University Admissions. Revealed at an expert meeting.The number of times the test is conducted is being considered from a one-shot game to multiple times.If it is realized, the university entrance examination will change significantly, but ensuring the reliability of scoring is likely to be an issue in the future.

According to the draft submitted to the expert meeting, unlike the mark sheet type center test, the new test is a selection type that asks thinking ability such as short descriptive questions, long question sentences, and multiple answers. Ask questions.I am trying to break away from the knowledge-biased questions and ask the ability to analyze the situation, discover problems, and solve them.

For English, emphasis is placed on the evaluation of the four skills of "reading, listening, speaking, and writing."Taking advantage of private exams such as the Eiken and TOEIC (International Communication English Proficiency Test), we are also considering taking the exam on a different schedule. From 4, a new test based on the new course of study will start.In response to this, the use of personal computers and tablets is being considered, assuming new subjects that combine science and mathematics.It is expected that the range of questions will expand, such as using videos. 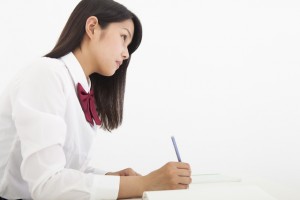 The descriptive test takes a long time to score, so it could not be adopted in the center test, which is taken by about 55 people.In the new test, it is being considered to build a mechanism for scoring the answers to descriptive questions on a computer and to extend the scoring period.The Ministry of Education, Culture, Sports, Science and Technology is considering determining whether or not there are words necessary for the correct answer in computer scoring and showing them to the graders.

However, even if it becomes a new test, it is still necessary to handle a huge amount of answers.Even if you use both computer and human scoring, it will be difficult to fairly score your thinking and expressiveness.It seems necessary for the Ministry of Education to urgently promote the establishment of unified scoring standards and the establishment of a system for graders to receive training to eliminate these concerns.