Discovered the world's first indistinguishable state between water and ice 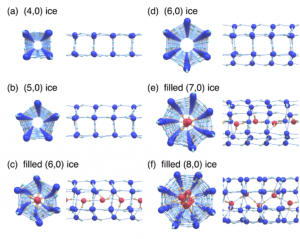 Molecular simulation is a method of reproducing the movement of atoms and molecules in a substance by calculating the attractive and repulsive forces acting on each of the atoms that make up the substance with a computer.It is very useful for analyzing phenomena that are difficult to verify in experiments and for predicting phenomena prior to experiments.Professor Koga et al. Investigated how water molecules trapped in carbon nanotubes behave when pressure and temperature are changed in this way.As a result, it became clear that when a high pressure of 1000 to hundreds of thousands of atmospheres was applied, the behavior was such that it became impossible to distinguish between liquids and solids.It was the first discovery of evidence that a solid-liquid critical point exists in the world.

This discovery is based on computer simulation, but it seems likely that it can actually be observed.If this state can be realized by experiments, it is expected that it will be possible to develop chemical reactions that occur only under the conditions of the solid-liquid critical point.In addition, since it is predicted that the thermal conductivity of carbon nanotubes will change rapidly, it may be possible to control the thermal conductivity by using the change of state of the substance trapped inside.

A national university with 150 faculties, 10 graduate schools, and 8 research institutes, which is about 4 years old.Based on the results of advanced research activities, we can cultivate the ability of students to participate in "creation of knowledge" independently, and foster a rich humanity through close dialogues and discussions between students and faculty members. In a wide range of fields both domestically and internationally […]