University of the Ryukyus

Rohto Pharmaceutical built a regenerative medicine research center in Ryukyu University and donated it.We will carry out basic research and clinical research using cells that have the ability to differentiate into various types of cells called stem cells. 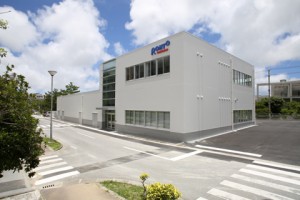 The human body is said to have about 37 trillion cells, but it is classified into about 200 types.Some cells cannot regenerate on their own if they are lost due to injury or illness.Regenerative medicine solves such problems.In the human body, one cell called a fertilized egg proliferates and differentiates to produce as many as 200 cells.Although pluripotent cells are lost in the process of growth, regenerative medicine has succeeded in scientifically creating pluripotent cells such as iPS cells.

On the other hand, although not all-purpose, there are stem cells with a certain degree of differentiation potential, which play a part in regenerative medicine research.Rohto Pharmaceutical has been conducting research that leads to the treatment and prevention of diseases by using adipose stem cells, which are one of such stem cells.Adipose stem cells have an excellent ability to differentiate into many types of cells compared to other stem cells.It also has the advantages of being easy to collect and easy to culture in large quantities.Research using stem cells has attracted attention not only because it can regenerate lost body tissue, but also because it can reproduce diseased cells.For example, it will be possible to test the efficacy of newly developed drugs on human cells without relying on animal experiments.

With this industry-academia collaboration initiative, it may be near the day when Okinawa will announce a new breakthrough in regenerative medicine and new drug development, where countries around the world are fiercely competing.Takeshi Onaga, the governor of Okinawa Prefecture, also commented, "It will greatly contribute to the improvement of the medical environment and industrial promotion of the citizens of the prefecture. We expect the formation of a world-class intellectual industry cluster."

University of the Ryukyus

Acquire specialized knowledge and skills through a variety of learning. Established 7 faculties, 9 departments, and 7 centers

It is the only national university in Okinawa prefecture and is the southernmost and westernmost university in Japan.We will ensure the quality of education and develop human resources who can play an active role and contribute to the world by utilizing advanced expertise and problem-seeking ability based on a wide range of education.Fostering wisdom and setting an example for society by fully drawing out diverse personalities and talents and opening up a new era […]