TOP > Careers > job hunting > The company forced the job hunting to end at the time of the offer, and the students consulted with 7% of the universities.

The company forced the job hunting to end at the time of the offer, and the students consulted with 7% of the universities.

In the job hunting activities of university students who are planning to graduate in the spring of 2016, 6% of the students are forced by the company to finish the job hunting in exchange for a job offer, and 7% of the universities and junior colleges are bringing in consultations. It was clarified in a joint survey of the employment problem round-table conference created by the Ministry of Science and national, public and private universities.In response to this, the round-table conference issued a statement calling for refraining from long-term detention of prospective employees. 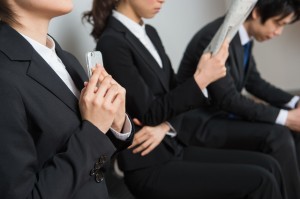 The survey was conducted in July, targeting the employment guidance departments of 82 national, public and private universities and junior colleges, and 3,943 students who wish to find employment.According to the report, 7% of universities and junior colleges answered "yes" to the question "Have you consulted about harassment-like acts such as forcing students to end their job hunting against their will?"Specific examples include "I was asked to call another company instead of a job offer at the interview", "I was detained for a long time and could not be selected by another company", "After the job offer" , I was warned that I would cancel if I knew that I was still working. "

On the other hand, when asked "Have you been harassed?", 5.9% of the students answered that they had "experience".Specific examples include "I was forced to stop job hunting for other companies instead of being unofficially decided", "I received calls including staying many times and could not be selected by other companies", "I consented to join the company by the end of July" I was forced to write a book. "

Job hunting for college students has been delayed for four months at the request of the government from students who are planning to graduate in the spring of 2016.However, in reality, the selection process started as usual, and the job hunting period has only been extended, so it is likely that a review of the system will be discussed in the future.

Source:[Ministry of Education, Culture, Sports, Science and Technology] Regarding the results of the survey (as of July 27) regarding changes in the timing of job hunting and recruitment activities in 7