The University of Tsukuba and International Christian University (ICU) held a press release and signing ceremony on April 4 regarding the new cooperation agreement that will start this year.


The keyword for collaboration is Campus-with-Campus, where both students can study at the partner university and earn credits in the same way as they study at their own university. "By sharing campus functions with each other and developing education that actively utilizes the education and research resources of both universities, we will improve the mobility of students and faculty and staff, and improve their educational and research capabilities in a mutually beneficial manner. , Promote trans-bordering. "The University of Tsukuba is already promoting Campus-in-Campus, which is the same initiative as overseas universities, and Campus-with-Campus is positioned as the domestic version.

As specific measures, in addition to the joint development of dispatch / acceptance study abroad programs and the establishment of new subjects, ICU students who mainly want to study medical science, sports science, arts, etc. are in Tsukuba. It is mentioned that students of the University of Tsukuba take basic ICU courses, mainly English courses, while receiving guidance on graduation research at the university.

In addition, it will be possible for both students to choose from a wider variety of study abroad programs, as it will be possible to study abroad at partner universities overseas.By the way, University of Tsukuba has about 70 partner schools in a wide range of regions such as Asia, Africa and Latin America, and ICU has about XNUMX partner schools mainly in Europe and the United States.

This announcement attracted attention because of the universities selected for the Ministry of Education, Culture, Sports, Science and Technology's Top Global University Project, as well as the well-known national and private universities, but the purpose of the collaboration is to be an excellent student in the rapidly declining birthrate. It reflects the strong sense of crisis of both universities that it is necessary to utilize their respective resources and strengths and to seek transborder cooperation beyond the boundaries of national and private universities.It was also shown that the University of Tsukuba is aiming for further enhancement of liberal arts education in English, and ICU is aiming for further enhancement of science education. 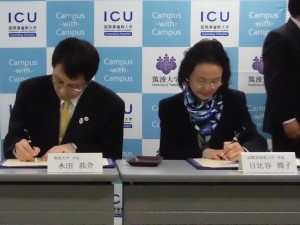 Kyosuke Nagata, President of the University of Tsukuba, said, "Since the generalization, many universities are losing liberal arts education in a big sense, and ICU has continued to do so at a high level since its establishment. "This is the greatest merit for us." Also, "We have already been collaborating with Waseda University and Tokyo University of Science with private universities, but this time, from the perspective of student education, liberal arts and specialized subjects. It is clearly different from the past in that we will combine these well and build a process of human resource development together. "Regarding the trans-borderization of universities, "In recent years, the number of students and human resources to be nurtured has diversified, and it is often the case that the resources of an organization are not sufficient. I think that it is a paradigm shift to form a mutually beneficial cooperation between education and research. "

Junko Hibiya, President of ICU, said, "Liberal arts college, awareness and understanding of liberal arts education has spread to Asia since around the 2000s, and there are several universities and faculties with" international liberal arts "as a sign in Japan. Under these circumstances, we are very grateful to have an agreement with Tsukuba University, which has a wider range of fields, in addition to the neighboring Tokyo Agricultural and Industrial University and Tokyo Foreign Language University, which we have already partnered with. " "In the ICU faculty, we can major in 31 major fields of specialization, including humanities, social sciences, natural sciences, and interdisciplinary fields, and we are able to deepen each specialty within the framework of the liberal arts university. However, both the scale and the number of faculty members are much smaller than those of Tsukuba University. Therefore, the merit for students who want to do graduation research in fields that ICU cannot fully cover, especially science, is especially great. There are many students who go to Tsukuba University, so it is a big advantage for them to be able to see the state of Tsukuba University from their undergraduate days and start studying there early. Another point is that ICU students from all over the world. Since there are so many applicants to study abroad in various countries and regions, we have endeavored to expand the number of study abroad destinations by joining the alliance of liberal arts universities around the world. Students will be able to participate in the dispatch program, and the range of learning will be further expanded. "

Regarding the difference in semester system between the two universities (Tsukuba has a two-semester system, ICU has a three-semester system) and concerns about the distance between the campuses, the semester is divided into multiple modules from the person in charge at each university. In addition to the answer that it is possible to respond, it was explained that students are encouraged to make effective use of each dormitory.Collaborative development of study abroad dispatch / acceptance programs and joint course establishment were considered as future issues.

Continue to challenge interdisciplinary fusion and internationalization, and develop human resources with intelligence and humanity

University of Tsukuba is the core of Tsukuba Science City, an international city with a high academic and cultural scent.The current education system is 9 groups, 23 classes, and it is possible to take specialized introductory courses from all fields, aiming to have creative intelligence and rich humanity.Solving global issues with soul genius […]