TOP > Research results > Kogakuin University's solar car, the runner-up of the world championship, appears at the 2016 Junior Summit in Mie

Kogakuin University's solar car, the runner-up of the world championship, appears at the 2016 Junior Summit in Mie

The third machine [OWL], which was produced by the solar car project of Kogakuin University and won the second place in the class in the world's largest solar car race in 2015, appears at the "3 Junior Summit in Mie". do.


The solar car [OWL] to be exhibited will be created by students with the support of many companies and organizations, bringing together cutting-edge Japanese technologies under the slogan "Made in Kogakuin University, Designed by Kogakuin University". He participated in the cruiser class of the "Bridgestone World Solar Challenge 2015" (held from October 2015 to 2015, 10) held in 18, and won the second place. 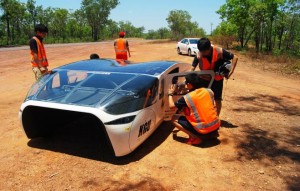 Unit 3 to be exhibited at the Junior Summit [OWL]

This time, NTN Corporation (President: Hiroshi Okubo, Headquarters: Osaka City, Osaka Prefecture), whose Advanced Technology Research Institute located in the same city has been selected as an inspection destination to contribute to the discussion of the "2016 Junior Summit in Mie" Participation in the exhibition project was realized because of the relationship of providing bearings for the project of Kogakuin University.During the Junior Summit, Unit 3 [OWL] is on display at the NTN booth.

The Junior Summit is an official youth program of the Group of Eight (Group of Eight), which started from the Glen Eagles Summit held in the United Kingdom in 2005. A children's version of the summit where children gather to discuss global issues related to the summit from the perspective of children.

Prior to the Ise-Shima Summit, the "2016 Junior Summit in Mie" will be held at Nagashima Resort in Kuwana City, Mie Prefecture as the main venue for issues related to children around the world during the period from April 4 to 22. Discussed themes and announced recommendations to the world with the world's leading leaders.The outcome document will be submitted to the Prime Minister.

A university that continues to evolve while inheriting tradition

Starting with the opening of Japan's first "Faculty of Architecture" in 2011, the "Faculty of Advanced Engineering" was established in 2015. With the birth of the "Department of Electrical and Electronic Engineering *" in the Faculty of Engineering, we are constantly reforming in line with the times.In addition, Hachioji Camper […]