The training ship "Oshoromaru" attached to the Faculty of Fisheries of Hokkaido University received the "Ship of the Year 2014 Fishing Vessel / Work Vessel Category Award" sponsored by the Japan Society of Naval Architects and Marine Engineering, and the award ceremony was held. It was held on July 2015, 7 at the Kaiun Club in Tokyo.

This is the 25th Ship of the Year, which recognizes technically, artistically and socially superior ships and marine structures completed in Japan during the year. It is a system. Held every year since 1, it aims to contribute to the progress of social life and spread the idea of ​​the ocean to the general public by promoting the construction of technically and artistically superior ships and marine structures. is. 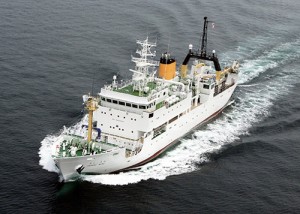 The "Oshoro Maru" of the same university, which won the Fishing Vessel / Work Vessel Category Award, is counted from the first vessel "Ninja Maru" that has contributed to the development of Japanese maritime technology education and fishery science for more than 1909 years from 100. It will be the 5th generation.

The "Oshoro Maru" with a total length of 78.27m and a maximum capacity of 99 people has an ice-resistant structure that can navigate to the polar regions, and has an electric propulsion system (propulsion motor, 1,000 / 300kw x 2, propulsion device, variable pitch propeller 4). It was evaluated as a high-performance research vessel with high research / training ability and habitability due to its anti-vibration / soundproof design (1 wing).

"Oshoromaru" is used not only for research and practical training in fisheries science-related fields, but also for international joint research with universities and research institutes in Japan and overseas, as well as catastrophic damage caused by the Great East Japan Earthquake. We will also support the reconstruction of the fishery industry that has received this.

Source:[Hokkaido University] The Ship of the Year 2014 Award Ceremony was held.

The origin of Hokkaido University dates back to Sapporo Agricultural College, which was established in 1876.Throughout its long history, we have cultivated the basic principles of "frontier spirit," "cultivating internationality," "education for all," and "emphasis on practical studies."Based on this philosophy, he has a high level of academic background that is internationally accepted, and has accurate judgment and a leader […].