Kogakuin University has unveiled the newly developed solar car "OWL" that will participate in the world's largest solar car race "Bridgestone World Solar Challenge 2015 (WSC10)" to be held in October 2015.

WSC is a race in which a solar car competes on a general road of about 3,000 km from Darwin in the north of Australia to Adelaide in the south. We will participate in the cruiser class of four-wheeled vehicles. 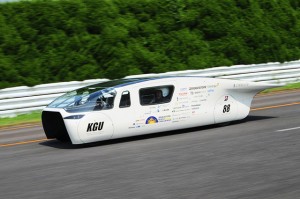 The new vehicle "OWL" is a solar car that students of the same university solar car project took about two years from concept planning to design and production with the support of 38 companies and organizations such as Bridgestone and Teijin. ..Developed with the aim of making a more practical and safe solar car, "OWL" has a total length of 2m x width of 4.5m x height of 1.8m, and the vehicle name "OWL" means an owl, which is a symbol of wisdom and wiseness. I layered it with a solar car that brought together the wisdom of the team.

The body of "OWL" uses an ultra-thin ultra-lightweight woven fabric with a thickness of 0.06 mm jointly developed by Toho Tenax and Sakai Obex, and the weight of the vehicle is less than 350 kg including passengers and batteries. ..As for the tires, we are actively incorporating the cutting-edge technology of Japanese companies, such as installing Bridgestone's solar car exclusive tire "ologic".
WSC2015 will open in Australia from October 2015th to 10th, 18.

* The Kogakuin University Solar Car Project is a project of 76 people in total, led by Hiroto Hamane (Associate Professor, Department of Mechanical Systems Engineering, Faculty of Engineering). Established in 2009. Won the national tournament in 2012 and 2014, and participated in the 2013 World Solar Challenge / Challenger class for the first time.

A university that continues to evolve while inheriting tradition

Starting with the opening of Japan's first "Faculty of Architecture" in 2011, the "Faculty of Advanced Engineering" was established in 2015. With the birth of the "Department of Electrical and Electronic Engineering *" in the Faculty of Engineering, we are constantly reforming in line with the times.In addition, Hachioji Camper […]