The 130th Anniversary Building of Komazawa University was adopted by the Ministry of Land, Infrastructure, Transport and Tourism for the 2014 "Ministry of Housing and Building CO2 Leading Project".

While CO2 emissions from buildings such as houses are on the rise, this project is promoting "CO2 saving" measures by publicly soliciting housing and construction projects with excellent "CO2 saving" and subsidizing the government. It has been implemented since 2008 for the purpose of improving the housing and production environment. 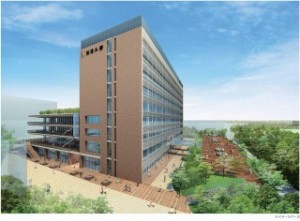 Image of completion of "130th Anniversary Building" (quoted from the source)

The 130th Anniversary Building of Komazawa University is a building with 2 basement floor and 2 floors above ground, and will have classrooms, a cafeteria, and a disaster prevention warehouse.Since the memorial building is adjacent to the Komazawa Olympic Park, we will take in open spaces and greenery that are in harmony with the park on the campus, and utilize natural energy such as wind, light, and heat for daily "CO40 saving" measures.Renewable energy is also used to secure a power source so that important operations will not be interrupted in the event of a disaster.In addition, we will optimize energy management by utilizing an autonomous water-cooled air conditioning control system, a wireless individual dimming control system, and information and communication technology ICT.Through these efforts, the memorial building can reduce COXNUMX emissions by about XNUMX% compared to the existing campus.

According to the evaluation committee of this project, "It is a well-balanced construction plan that incorporates passive technology (using natural energy such as light, heat, and wind) by taking advantage of the characteristics of being located in a blessed environment, and the equipment is efficient. Efforts such as optimal control for operation are expected to spread in the future and are evaluated as leading. Taking advantage of the characteristics of an environment-friendly facility on the university campus, this facility is an initiative to promote energy-saving behavior of faculty members and students. I hope that it will be utilized in. "

The Komazawa University 130th Anniversary Building was completed in December 2017 and is scheduled to start operation in April 12.

Source:[Komazawa University] The 130th Anniversary Building was adopted by the Ministry of Foreign Affairs as a "CO2 Leading Project of the Ministry of Housing and Buildings" -realizing an environment-friendly urban campus

Komazawa University was opened in 15 as a modern university.Its source is the Zen Gakurin (Sendanrin), which was founded about 1882 years ago, and has a long history and rich traditions.With the teachings of Zen and Buddhism as the founding philosophy, while acquiring advanced scholarship, the practical ability to utilize it in the real world is also […]