A research group of Professor Tsuyoshi Arakawa (Department of Bio-Environmental Chemistry), Faculty of Industrial Science and Technology, Kinki University has developed a concrete block that absorbs and removes radioactive cesium. 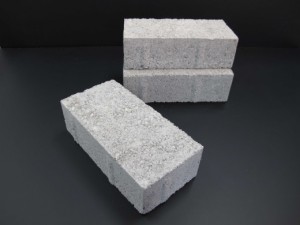 The developed block is a general concrete block with a substance called "zeolite" and "ferrocyanide" such as nickel and cobalt added. "Zeolite" has a high absorption capacity for radioactive substances, and it is also attractive because it does not cost much because it can be made by synthesizing limestone with the industrial waste "Aluminum Dross" that is made by crushing aluminum sashes.When this "zeolite" and "ferrocyanide" that enhances the light-shielding effect of radioactive cesium are added to the block and placed in a solution of radioactive cesium, the residual rate of the solution of radioactive cesium drops sharply, and 90% or more is removed. The result was to achieve the dyeing rate.

If this block is installed in areas called hot spots that are highly radioactively contaminated or in lakes and marshes that contain contaminated water, it can be expected that decontamination will be easy and efficient, and the university will promote it throughout the university. We plan to utilize it in the "All Kindai" Kawamata Town Reconstruction Support Project *.We are also applying for a patent in collaboration with the block manufacturing company "Fukuoka ILB Co., Ltd." in Kotake Town, which jointly developed the block.

* The "All Kindai" Kawamata Town Reconstruction Assistance Project is a project that Kinki University is working on to support the reconstruction of Kawamata Town, which is affected by the nuclear accident caused by the Great East Japan Earthquake.We support the revitalization of the local agricultural industry, reconstruction support such as education and cultural development, and recovery support from the disaster such as decontamination work.

Source:[Kinki University] We have developed a concrete block that removes radioactive cesium.

Kinki University has established the Faculty of Medicine, the Faculty of Arts and Sciences, and the Faculty of Correspondence Education, and practices "practical education" in all faculties.By promoting many industry-academia collaboration projects and combining cross-disciplinary expertise and skills, faculty members and students are united to acquire the knowledge and skills to solve various contemporary issues. 2 […]