A research group led by Professor Minoru Asada of Osaka University designed and developed the basic skeleton of the child-type robot "Affetto".It is said that it will be useful for research to clarify whether a robot that can move flexibly and flexibly and is suitable for interacting with humans can build a relationship as an intimate partner.

Professor Asada and his colleagues have aimed to gain a deeper understanding of human development through robot research and to discover the principles for intelligent robots.To that end, we have hypothesized how children can learn about their surroundings and become smarter, and have incorporated them into their children's robots.The important thing here is that the child learns a lot in close contact with the caregiver.In order for a robot to do the same, it must behave and look more natural.To that end, the research group worked on the design of a basic skeleton that incorporates flexible and wide range of joints in a size of about 80 cm.By incorporating a power source that uses air pressure, we have made it possible to operate quietly and supplely while maintaining quickness and strength.However, this alone may cause injury because it strongly repels when a person applies external force.This point was avoided by redesigning the joints.Also, many power mechanisms must be built into a body of about 80 cm.By properly using barometric power and motor depending on the part, it has become possible to arrange them in a space-efficient manner. 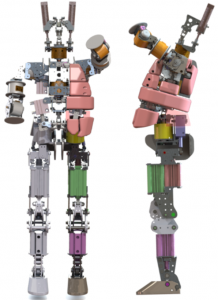 Until now, robots have been used in the production industry, and attempts have been made to use them as human partners.On the other hand, it is also increasingly used as an experimental device for exploring the learning mechanism.Therefore, there is a need for a way to interact closely with humans.By implementing functional skin in addition to the skeleton developed this time, it will be possible to realize a child robot that can interact more closely.