Professor Takakuni Doseki of Ritsumeikan University has developed a wireless power supply method for multicopters such as drones using radio waves in the UHF band.We have succeeded in clearing the problem of efficiency reduction when the transmission distance changes, which was a problem with conventional wireless power supply systems.

While drones, which have been rapidly attracting attention in recent years, are being investigated in what situations they can be used, there is an urgent need to develop a method for supplying power without touching them directly using wireless communication.Some of the wireless power supplies that have been put into practical use are used for charging electric toothbrushes, etc., and power is transmitted using low-frequency radio waves generated from the coil.However, in order to transmit power with a large output using this method, it was necessary to increase the size of the coil to several tens of centimeters or more.In addition, there was a problem that the power transmission side and the power reception side had to be one-to-one, and the efficiency dropped extremely when the distance to the power transmission target changed. 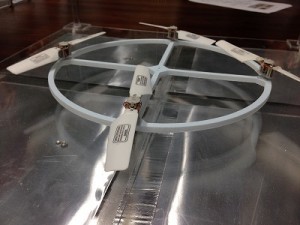 To solve this problem, we developed a method that uses high-frequency radio waves emitted from a type of antenna called a batch array made of a metal plate instead of a coil.It has the advantage of being able to transmit power to multiple targets and not significantly reducing efficiency at a distance.We also improved the antenna on the power receiving side.Since it takes up space to mount the antenna and propeller separately, I thought about integrating them.Since the propeller rotates, the wiring will get entangled if it is just integrated.We also designed the circuit to avoid this.As a result of mounting the power transmitter / receiver developed in this way on a multicopter without a battery, we succeeded in ascending about 10 cm.In terms of power transmission efficiency, we have achieved about 20 to 25%.

In the future, we will continue to improve efficiency and further extend the ascent distance.In addition, it seems that we will also consider applications other than multicopters, such as supplying power to gyros that rotate like propellers and in-wheel motors.